To live a better story.

At some point during the night, the Spirit led me towards a foggy shoreline blanketed with smooth grey and white stones which filled the apple of my eye for as far as I could dare to see. A silence of biblical proportions swept over this dream and yet the only sound which could be heard was of tide gently slapping rocks beneath my feet. Horrific clouds reached for miles above me and stretched the width of many great nations before cracking open and releasing wave after wave of life giving water to the parched earth on which I stood like a pawn waiting to be moved by forces unseen. The darkness came, the earth stood still, I looked for cover and waited for an eruption of light to come screaming down from the netherworld to vanquish evil once, for all always. But everything remained still. The nothingness continued.

I thought it might be considered, by some, to be quite presumptuous of me to post multiple articles in a relatively short time period but I began to ponder who I thought I was to contend with the winds of inspiration and challenge its’ coming and going and just be grateful the words entered my heart in the first place. Whenever the poetic strings are plucked it would be to my advantage to heed the song and yet resisting these moments of creativity could in fact alter future endeavors I would wish to undertake with my pen and pad, actually, I loathe writing longhand but respect people who prefer to use this method to get their individual thoughts and ideas down. I have a tendency to get easily distracted and longhand makes writing more difficult because I have to center most of my short attention span on spelling and staying between the lines. Suffice to say I shall stick with my laptop and the Microsoft Word program installed within.

A good story is concocted deep inside the inner most chambers of a creative heart before working its way to the imagination where the fine tuning begins. Letters are pumped through the blood stream until they morph into words which other people will be able to recognize once you jot them down. Writing must come from the heart or else you run the risk of failing to keep your audience interested and, ultimately, inspired and this is, for all intent and purposes, the very reason we write in the first place. When my stomach begins twisting for food my first instinct is to make a sandwich and yet when I do it turns out to be anticlimactic because I fail to put the heart behind what I choose to consume. I despise cooking so whatever I make turns out to be nothing short of tasteless.

Donald Miller writes like this. After reading his book “A million miles in a thousand years” for the third time this year, I have grown to admire this man and the words which he uses to describe life and the pursuit of something more than just everyday mediocrity. He brings us on a journey based on his attempt to live a better story by walking in faith and partially by sight, and challenges us to step out and live extraordinary lives. Donald writes, “I’ve wondered if one of t 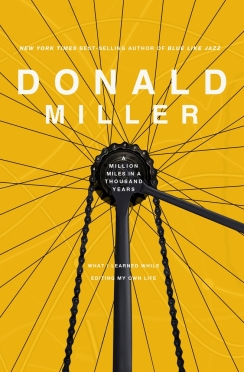 he reasons we fail to acknowledge the brilliance of life is because we don’t want the responsibility inherent in the acknowledgement. We don’t want to be characters in a story because characters have to move and breathe and face conflict with courage. And if life isn’t remarkable, then we don’t have to do any of that; we can be unwilling victims rather than grateful participants.”  He goes on to discuss what he calls “inciting incidences” and describes it as possible life changing events. Don said “Great stories go to those who don’t give in to fear.” He gives us a few examples in this excellent read on how he caused a chain reaction which affected the lives of everyone he came in contact with. He hiked the Inca Trail at Machu Picchu to capture the heart of a young woman he was trying to court. He biked from Los Angeles to Washington D.C with fifteen other adventurers in order to bring awareness to the suffering of the world, and in the process change his own personal story so it would reflect outwards to reach a wider audience of people stuck in the traffic of life. He brings wit and humor to the table once again for people like me who need an inciting incident to kick-start the story I know is living inside of me waiting to be printed and bounded in all its coolness. I am going to end this blog with an excerpt from Donald’s book and I implore you to get in your car and go pick up a copy I promise it will be money well spent. Until next time, adios!

“A good storyteller doesn’t just tell a better story, though. He invites other people into the story with him, giving them a better story too.”